I know, I bet you were expecting the sequel to the Intellivision cartridge, weren't you! But this one is a bit surprising -- prior to their deals with SSI that put D&D on the CRPG map in a big way (which we'll be seeing a lot of), TSR briefly had its hand directly in video game publishing itself! They're not the only company to attempt to make the leap from dice and miniatures to floppy diskettes -- renowned wargame label Avalon Hill put a big push into its software presence around this time, and even Games Workshop ended up publishing some fantasy text adventures for UK microcomputers. But they all pretty much got out of the game after dipping their toes in the water and returned to their core businesses. (Flying Buffalo, who are somehow still hanging in there, extended its status as third-party module-maker and used mainframe computer time-slices to moderate play-by-mail games -- and generate random solitaire adventures, one of which is a gem in my gamebook collection -- but I digress.) 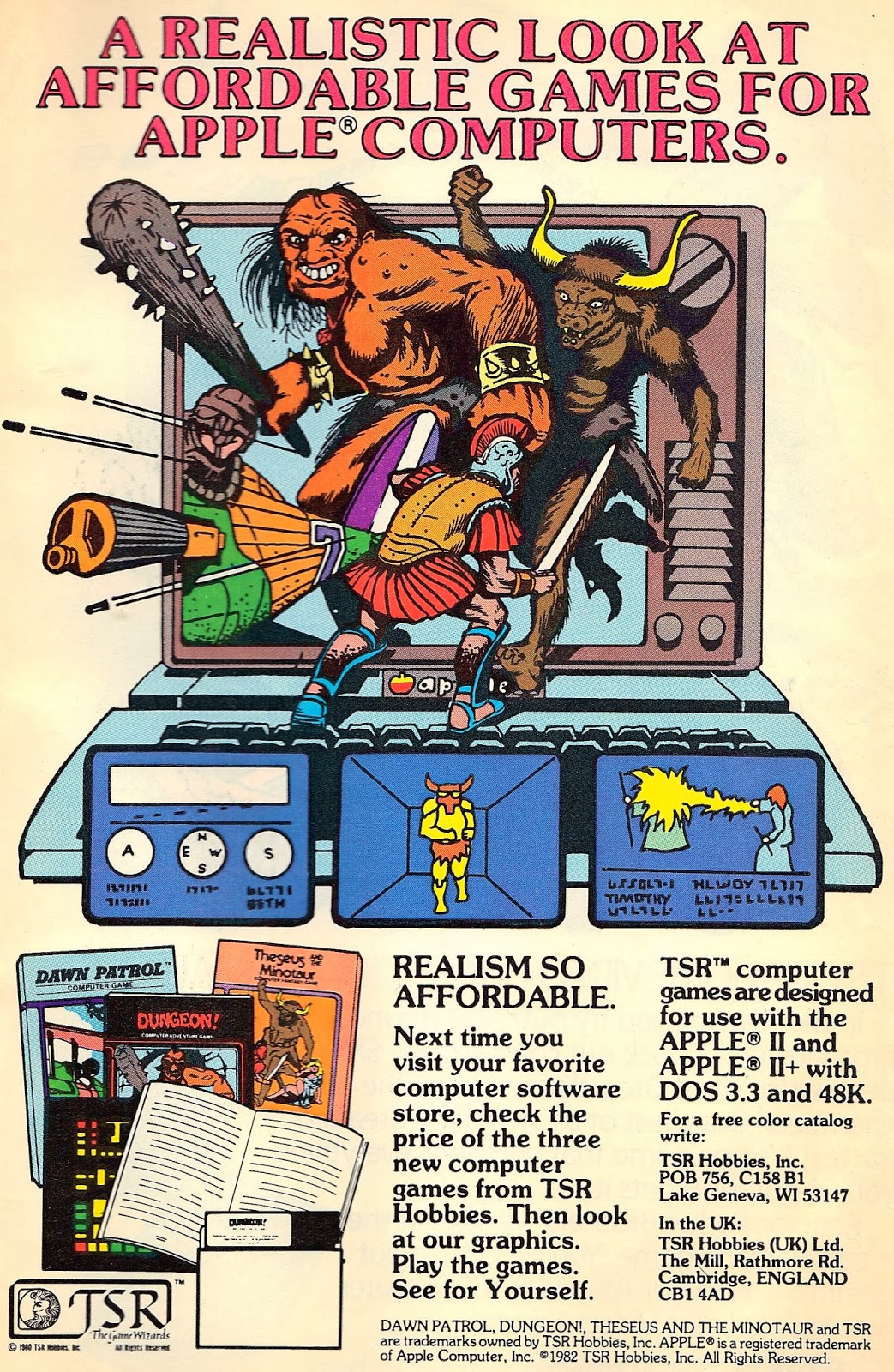 A REALISTIC LOOK AT
AFFORDABLE GAMES FOR
APPLE COMPUTERS.

Next time you visit your favorite computer software store, check the price of the three new computer games from TSR Hobbies. Then look at our graphics. Play the games. See for Yourself.

TSR computer games are designed for use with the APPLE II and APPLE II+ with DOS 3.3 and 48K. 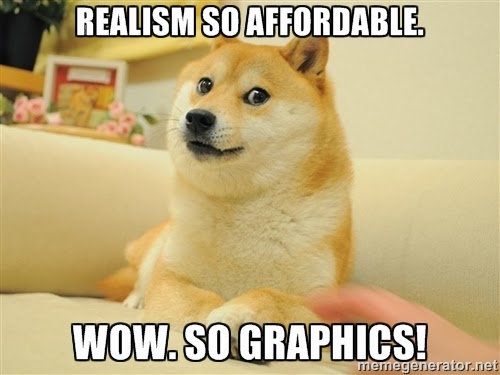 When we're celebrating the 40th anniversary of D&D, that likely predates the incorporation of TSR, which was only thrown together to handle the surprising interest in The Strategic Review's (see what they did there?) fantasy-party rules for the Chainmail tabletop wargame. (A pity; had it been convoked more, er, strategically, it might have escaped the speck of rot at its heart that led to, well, bad developments we have already looked at elsewhere in this blog. Maybe Gygax would have remained at the helm of his creation instead of getting distracted with the D&D cartoon, the Gord the Rogue novels, Dangerous Journeys and, well, other distractions from his core business. But it's pointless to speculate.) [Note: I was wrong. Wikipedia says 1971 Chainmail, 1973 TSR, 1974 Dungeons & Dragons.] Maybe they didn't realise that D&D would remain their enduring cash cow, buoyed with a few bestselling paperbacks. (Certainly they never imagined that collectible card games would be so profitable that the makers of Magic: the Gathering would end up buying TSR wholesale from the Dille family. That was, to understate, somewhat of a surprise.)

This ad promotes three games, all for the Apple 2. So they got in there early -- the market wasn't yet clogged with Commodores, Ataris and TI machines (or PCs for that matter); virtually the only other platform they might have reasonably aspired to at this early (1981) date was the TRS-80, but that was a shrinking early-adopter market which had been losing ground to the brainchild of the Steves Jobs and Wozniak. (Remember that Apple was in the hardware business back when Microsoft was primarily a business that licensed BASIC language implementations for 8-bit microprocessor operating environments.)

The ad talks up three different games, one of which will be somewhat familiar to TSR fans and the other two of which were pretty much random flashes in the pan: a computer version of TSR's Dungeon! board game (probably the software product which prevented Infocom's Zork from being published under the planned name "Dungeon"), a sci-fi game entitled Dawn Patrol, and a Greek mythology-themed 1st-person maze simulator called Theseus and the Minotaur, a grand old public domain theme unrelated to the subsequent genre of puzzle games taking their name from the same mythological theme (and hence, sorry TSR, pretty much an un-ownable trademark. Now ask me about the time they claimed registry over the word NAZI(tm).) I have only played (and documented) that latter; the other two are blanks to me, but conspicuously the ad talks up three elements: realism, affordability, and the games' graphics. We know in retrospect that the Apple 2 was only capable of just about as much realism as ELIZA was (which did, admittedly, trick people into giving it a pass for the Turing test) -- it was the C64 that endures today with showboating demo dazzling, while the Apple 2 was built with just enough multimedia capabilities to allow Woz to re-implement his work on Atari's Breakout cabinet -- and conspicuously again the failure of the ad to actually name any prices leads me to believe that the games may have had a little sticker shock. As for the graphics? We'll just say that they weren't quite up to the level of the images seen emerging from the Apple monitor (heh, humorously, perhaps subconsciously-relevant typo: minotor). It doesn't matter: whatever the best-looking game of 1981 was, it was still probably pretty ugly. Graphics were, at this moment, still a losing proposition.

I do, however, dig the illustrated faux-screenshots, with the Charlie Brown adult wah-wahing through the on-screen text, save for occasionally-resolving proper names like SETH and TIMOTHY. (Name of the ad's artist?) We see a compass rose on the left, presumably a control screen from Dawn Patrol (and darned if I know what the A and S controls are for); Theseus' minotaur is plainly apparent in the centre ring and off to the right duelling wizards, presumably from Dungeon!, seem to be taking turns frying each other's faces off. (Thank goodness for the old asbestos beard trick!)

The bottom left suggests that the games come with floppy diskettes (phew, will save some typing) and some kind of booklet -- a manual? Behind the book is a display of starry pixels, though what they are intended to represent remains unclear.

I don't know if I would have bought TSR's video games, had I owned an Apple and, y'know, not been a 2-year-old. They're known for one thing, and this is kind of related, but kind of very different at the same time. It's like if McDonalds began selling chewing gum. Likely the rest of the market had similar reservations, since as best as I can tell, these were their only forays into software publishing for the home computer.

Posted by Rowan Lipkovits at 8:12 AM